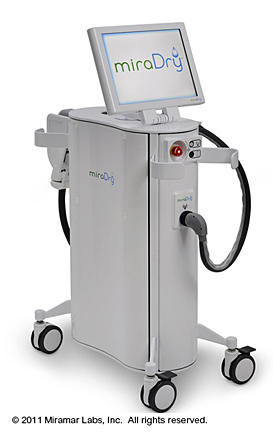 In February 2011, the U.S. Food and Drug Administration granted clearance for a new type of treatment for axillary hyperhidrosis (excessive underarm sweating) called miraDry. miraDry is also CE-marked in Europe and available in more than 50 countries. miraDry uses a non-invasive handheld device to deliver precisely controlled electromagnetic energy beneath the underarm skin to the area where sweat glands are located, resulting in thermolysis of the sweat glands. It is believed that sweat glands do not grow back after treatment so the effect can be seen almost immediately and results are lasting after two or three physician visits. In a clinical study following 120 patients, 70% of miraDry recipients said their sweating no longer bothered them after 1.5 years. While miraDry is promising news for those who suffer with underarm sweating, it is not yet cleared or optimized to be used to treat excessive sweating in other areas such as hands, feet, back, or groin because the procedure/device has been developed to take into account the physical attributes of the underarms.

In 2021, the International Hyperhidrosis Society and two physician experts conducted a webinar about miraDry, answering the most common questions about this novel treatment modality. The 40-minute video is available for anyone to watch and it is highly informative for patients and providers, alike.

miraDry is a third generation microwave-based device that selectively heats the interface between the skin and underlying fat where the sweat glands reside. An integrated vacuum system lifts the skin and underlying tissue a few millimeters into the treatment chamber. During the treatment cycle (consisting of energy delivery time and post-cool time) cooling fluid flows through a chamber in contact with the skin, protecting the epidermis and upper dermis from excess heating. Structures deeper than the sweat glands are protected from heat injury due to the limited penetration depth of microwave energy.

In the March 2013 edition of peer-reviewd Seminars in Cutaneous Medicine and Surgery, Carolyn Jacob, MD wrote:

"The treatment of primary axillary hyperhidrosis can be rewarding using noninvasive microwave technology. Because the microwaves preferentially target the region of the skin where the sweat glands reside, leading to localized thermolysis of the sweat glands, patients can now benefit from permanent targeted sweat reduction. The microwave treatment has been shown to be safe and effective in >6000 procedures to date."

In Seminars in Cutaneous Medicine and Surgery, Dr. Jacob cited the following data regarding treatment for axillary hyperhidrosis with miraDry microwave technology:

"A study by Drs. Chi-Ho Hong and Lupin on 31 patients showed 99% efficacy persisting after 12 months. Efficacy was defined as a drop in HDSS from a 3 or 4 to a 1 or 2. Patient satisfaction was also rated as 90% at 12 months after the treatments. The average patient's sweat was reduced by 82%."

A study published in the Journal of Cosmetic Laser Therapy in 2013 showed that miraDry was effective in treating both axillary hyperhidrosis and axillary osmidrosis. As part of the study, 11 patients in Asia were treated with miraDry and then evaluated 7 months later for improvement of symptoms. At the follow-up, 83.3% of the underarms treated were determined to have experienced a 2 point improvement on the Hyperhidrosis Disease Severity Scale (HDSS). Among those underarms that had exhibited osmidrosis 93.8% showed good to excellent results.

In a large, sham-controlled study at 7 sites in the U.S., 120 subjects were randomized (81 in the active treatment group and 39 in the sham treatment group). Treatments were conducted in one to three procedure sessions, typically spaced 2 weeks apart. Subjects in the sham group were followed for 6 months. Subjects in the active group were followed for 12 months. The major findings from the study were:

The miraDry procedure using the commercial device was tested in 2 sites in Canada in a single-group study of 31 subjects. These subjects were treated in one to three procedure sessions, with procedure sessions now being held two to three months apart. The major findings from this study were:

1) A reduction to an HDSS score of 1 or 2 in 90% of subjects (measured 30 days post-treatment)
2) The procedure and device improvements have stabilized the efficacy seen at later time points compared to prior studies; the last reported efficacy was 94% at 3 months post-treatment
3) The average reduction in amount of sweat produced (measured by gravimetric assessment) was 82%.
4) Patient satisfaction tracks very closely with efficacy and has been reported at >90%

To perform the treatment, subjects receive infiltrative local anesthesia in a grid pattern to the entire axilla. The treatment is provided via serial placement of the handpiece, with an active area of approximately 10mm by 30mm. After placement of the handpiece, the treatment cycle is activated. Upon activation, a vacuum is created which gently draws the skin against the thin ceramic treatment plate. Chilled fluid passes behind the plate providing cooling to the superficial levels of the skin. Sensors ensure that the skin is in close apposition to this cooling surface. Microwave energy is then applied non-invasively in a very directed fashion via multiple antennae within the handpiece. The energy is delivered over approximately 30 seconds followed by a 20 second post-cool period. Upon completion, the vacuum is released and the cessation of the audio signal indicates the end of the treatment cycle. The operator then moves the handpiece to the next adjacent treatment area and the process is repeated. Based on clinical testing, two procedure sessions approximately 3 months apart are recommended for optimal efficacy results.

There is minimal downtime afterwards. Sometimes a mild over-the-counter pain medication and ice packs are recommended for a few days. Most patients are able to return to normal activities or work right after the procedure, and can typically resume exercise within several days.

As mentioned above, the International Hyperhidrosis Society and two physician experts have recorded a webinar about miraDry, answering the most common questions about this novel treatment modality. The video is available for anyone to watch and it is informative for patients and providers, alike.

Publish modules to the "offcanvas" position.